The Yorkshire Dales are a beautiful part of the UK and are full of photogenic locations including waterfalls, limestone pavements, old ruins, barns and viaducts.  We spent a wonderful few days there this summer. Here are a few photographs from our visit. If you click on any of the photographs it will take you through to the Gallery. 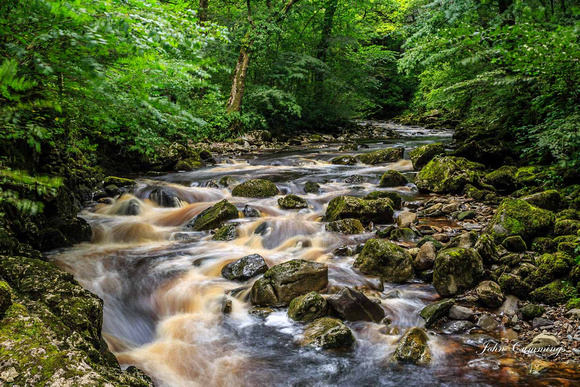 On our first day we decided to do the famous Ingleton Waterfall Walk which is one of the most popular walks in Yorkshire as it is full of spectacular waterfalls. This is a shot of the start of the walk alongside the River Twiss. 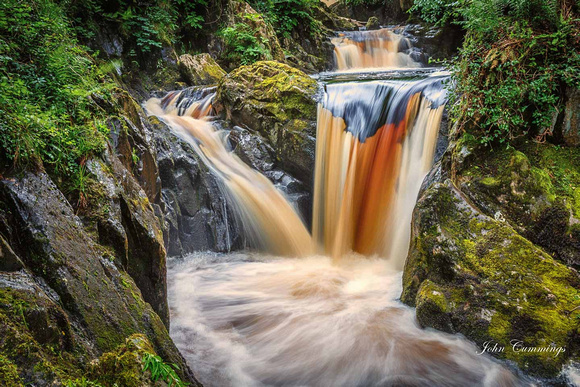 Pecca Falls is my favourite waterfall on the walk and is reached after about half an hour of walking. 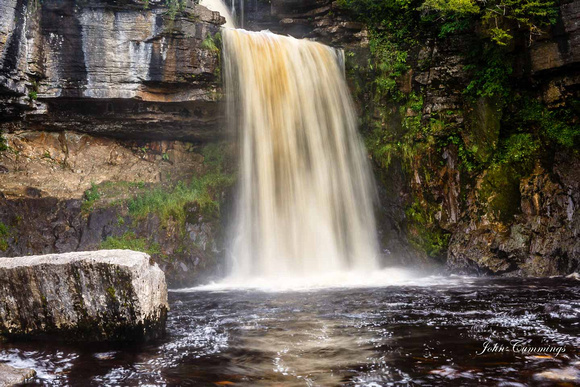 The next waterfall on the walk is the impressive Thornton Force which is the largest of the falls on the walk. 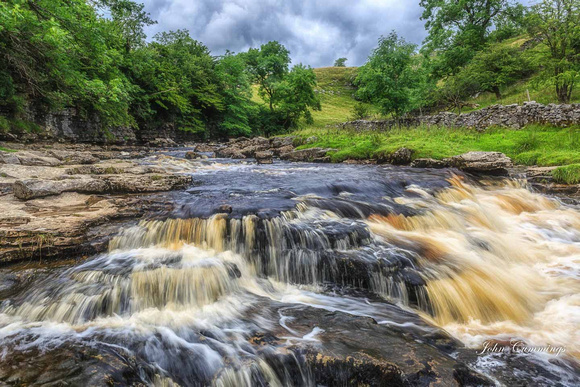 I thought the rapids at the top of Thornton Force were just as impressive as the waterfall. 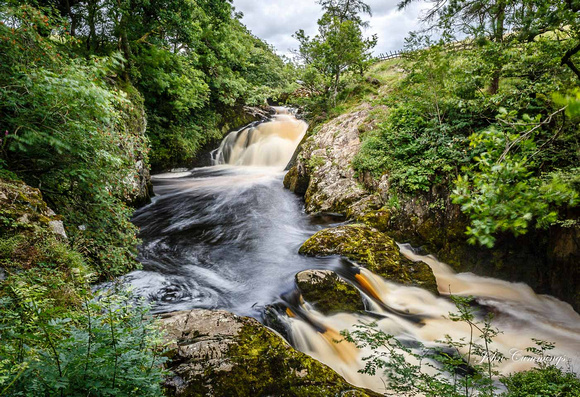 After a while you arrive at Beezley Falls on the River Doe. 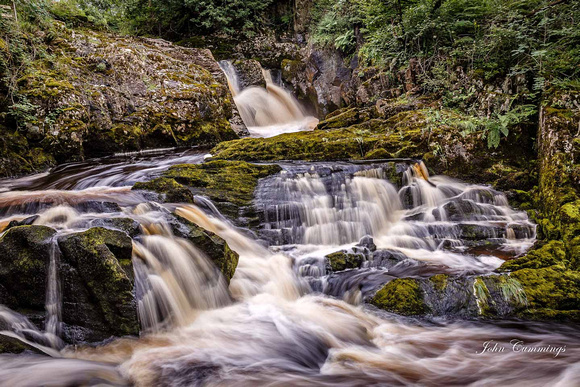 Next up is the Rival Falls 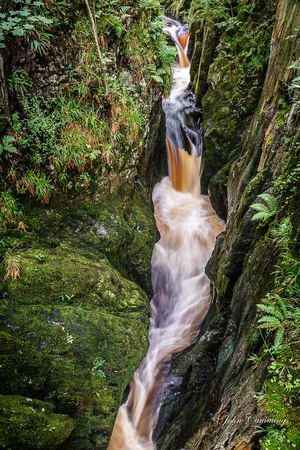 The final stop on the walk is Baxenghyll Gorge which has a nice viewing bridge over the gorge.. 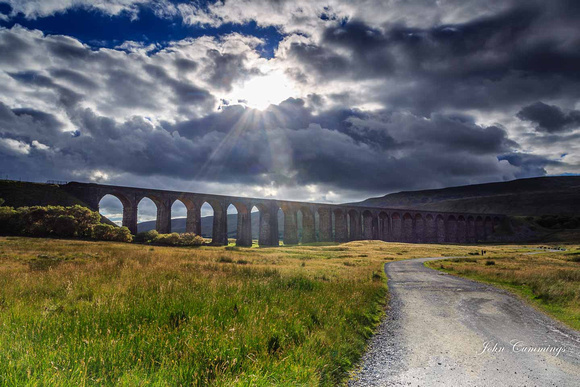 On the way to our cottage in Masham after Ingleton we passed by the beautiful Ribblehead Viaduct. This was built in the 1870s in order to carry trains along the Settle-Carlisle railway route. It is 400 metres long with 24 arches It was late in the evening and starting to rain when we got there but I managed to get this shot of the sun's rays peaking through the clouds. 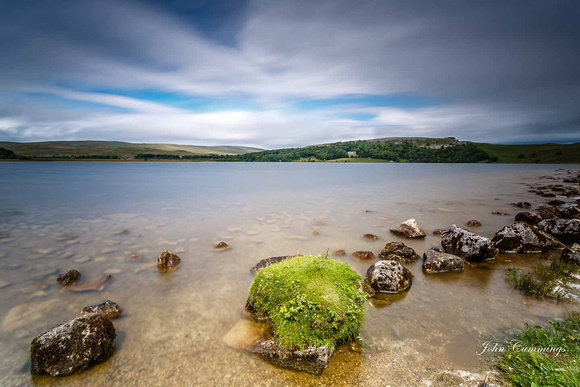 The next day we spent in Malhamdale. This is a shot of Malham Tarn which I used to visit on school trips many years ago. This tarn is set high up in the Yorkshire Hills. 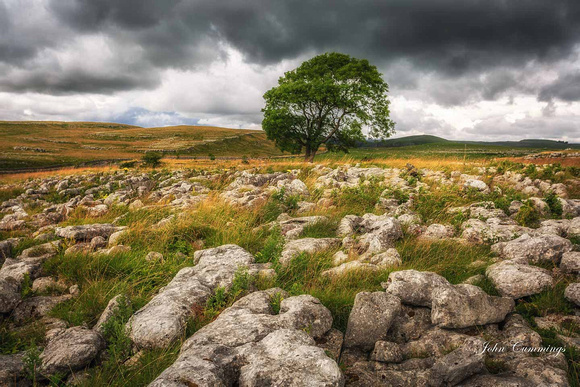 There is a lot of limestone pavement around Malham. This particular shot is of a lone ash tree that is particularly well known in photographic circles. 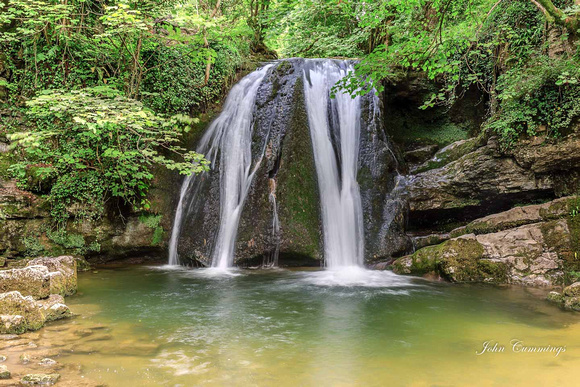 Janet's Foss is a nice little waterfall situated near Malham. It is named after Janet the Fairy Queen who was thought to live in a cave behind the waterfall. 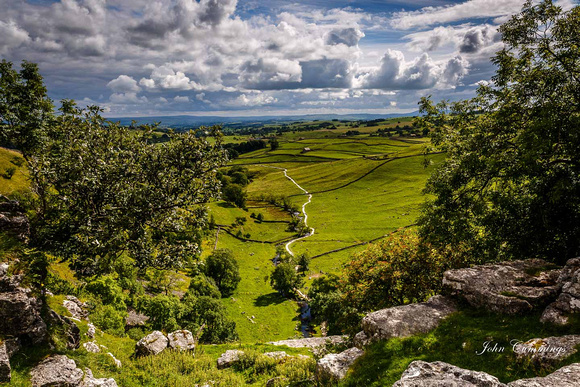 Malham cove is a huge limestone cliff which is very popular with climbers. This is a shot from the top of the Cove looking down the valley. 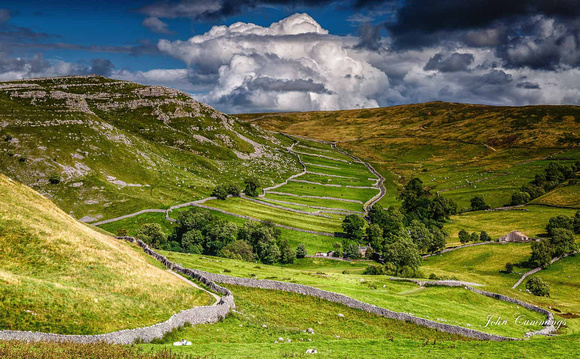 This is one of my favourite shots of our time in the Yorkshire Dales. It sums up the beauty of the place quite nicely. Great views, rolling fields and drystone walls. 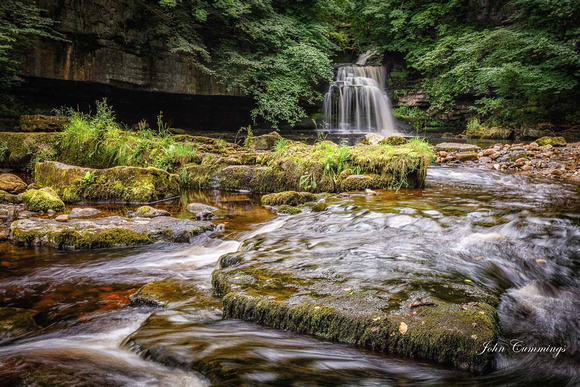 We spent the next day in Wensleydale. This is probably the most well known of the valleys in Yorkshire. The valley runs west to east following the course of the River Ure. Our day started at West Burton Falls. This is a very photogenic waterfall because it is set in a horseshoe-shaped gorge. 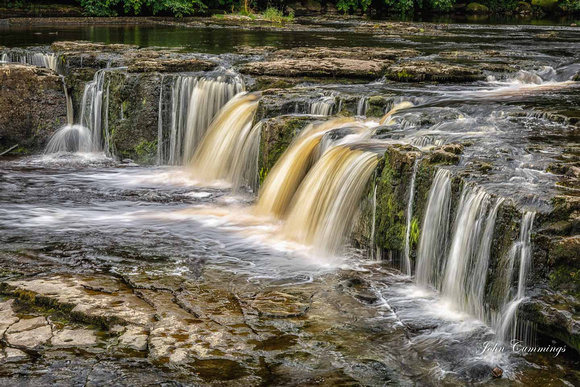 Aysgarth Falls are the most popular waterfalls in the Yorkshire Dales as they are easily accessible and they featured in the film "Robin Hood Prince of Thieves". They are backdrop for the fight scene between Robin Hood (AKA Kevin Costner) and Little John. This is a shot of the Upper Falls. 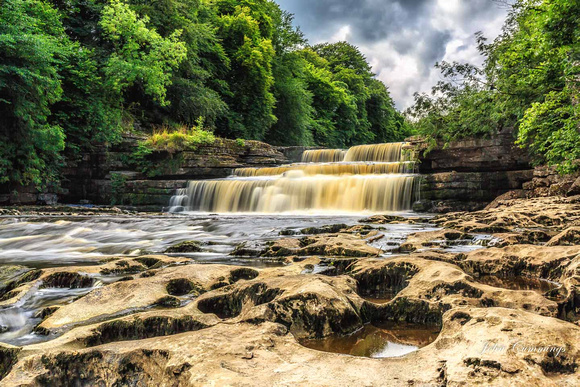 The Lower Falls are my favourite as it is very easy to get down to the water's edge. 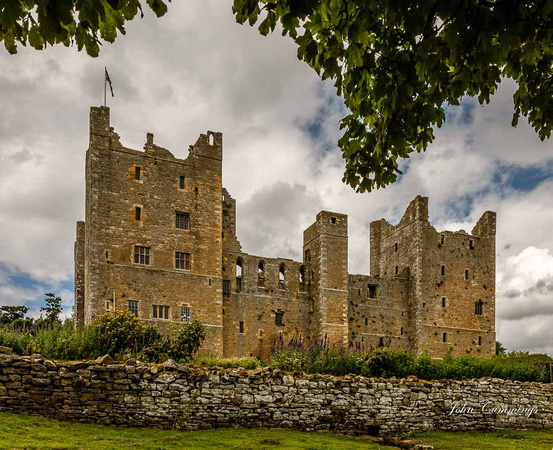 After a morning of waterfalls we had a change of scenery and visited Bolton Castle. This castle can be seen for miles around as it situated on top of a hill. It was built in the 14th Century. 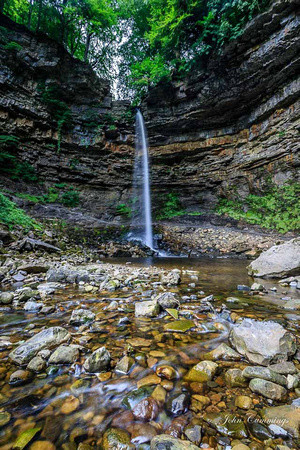 This is Hardraw Force which is England's highest single-drop waterfall. 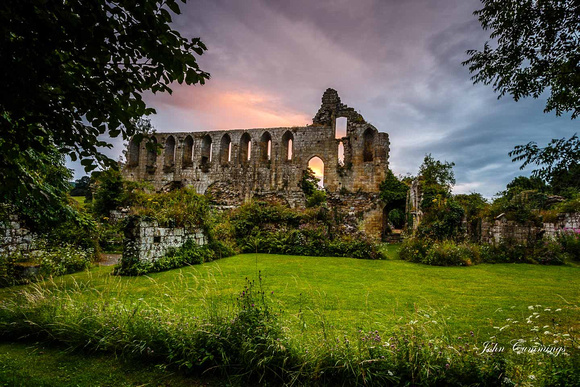 I decided to get a sunset shot that evening at Jervauxl Abbey which is a ruined Cistercian Abbey near Masham. It was quite interesting being the only person there. The Abbey was founded in 1156 but was plundered during the dissolution of the monasteries in the 16th century. 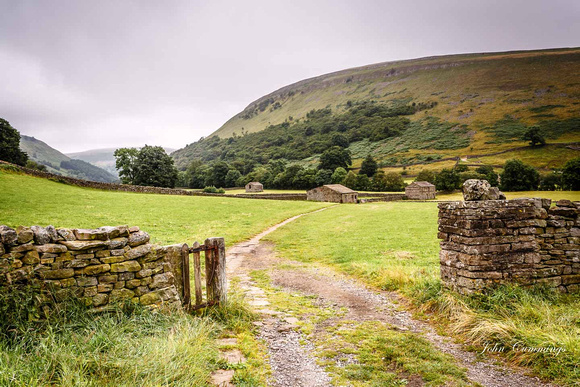 Our last day was spent in Swaledale. This valley follows the course of the River Swale. The Valley has some of the prettiest field patterns and barns in the whole of Yorkshire. This is a shot of Muker Meadows behind the village of Muker. 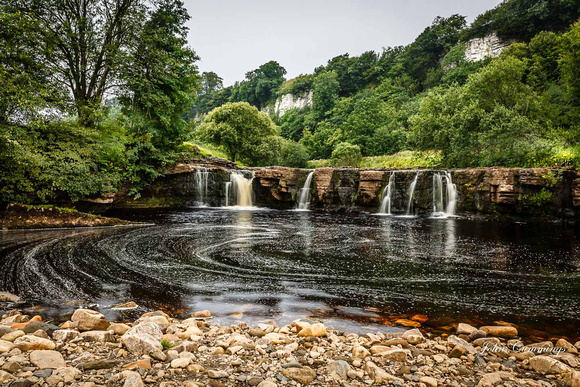 Swaledale has its share of waterfalls. There are lots of them near the village of Keld. This is Wain Wath Force. 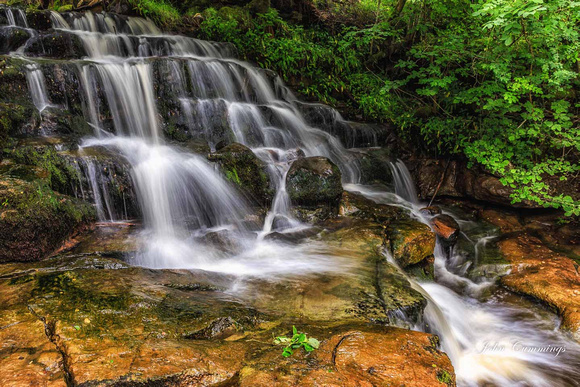 East Gill Force is a small waterfall on the East Gill which is a tributary of the Swale. It is actually two waterfalls, Lower and Upper. This is a shot of the Lower Falls. 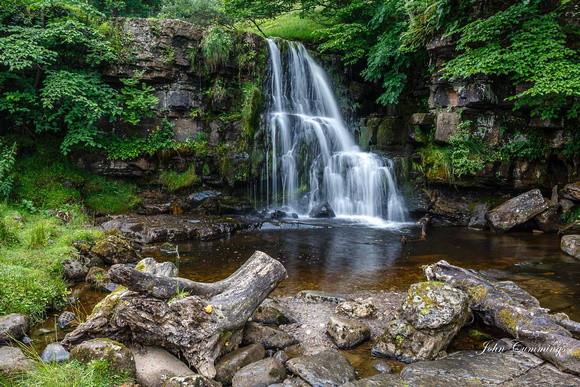 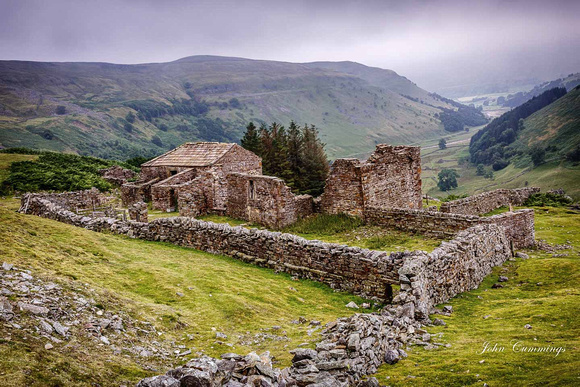 Above the village of Keld are the ruins of "Crackpot Hall". It has been abandoned since the 1950's but makes a great foreground to the views down the valley.